1. International Law - treaties, the law of multinational bodies,  AND
2. The patent law of individual nations. 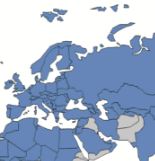 Patent Treaties - U.S. is a Party

The following list links to some important patent-related treaties to which the United States is a party. Citations marked "UST" cite to the volume and page number of United States Treaties and Other International Agreements (UST). Citations marked "TIAS" refer to the document  number in the Treaties and Other International Acts Series.

Lexis and Westlaw Edge contain some case law for other countries.  See the Foreign Law tab of this guide for more sources for cases.