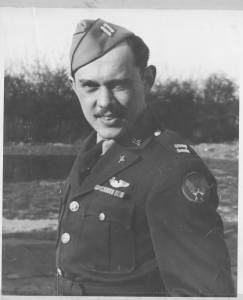 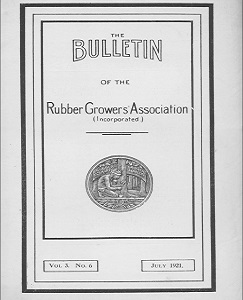 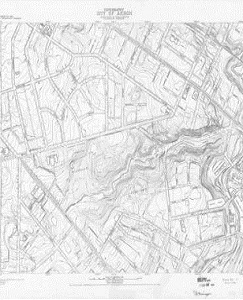 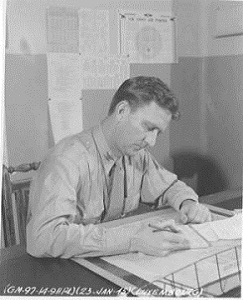 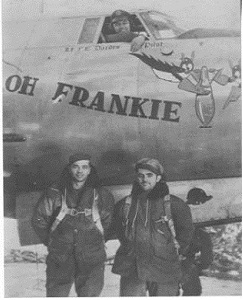 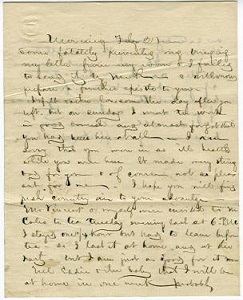 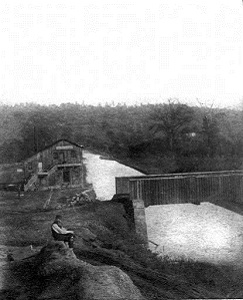 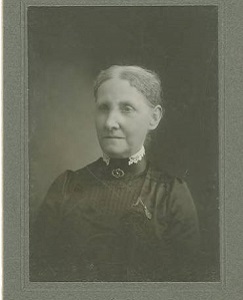 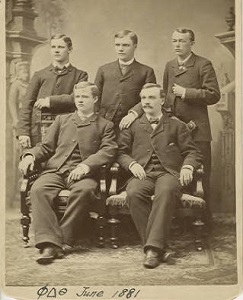 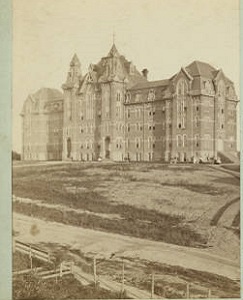 The University of Akron is the public research university for Northern Ohio. It is the only public university in Ohio with a science and engineering program ranked in the top five nationally by U.S. News & World Report. IdeaExchange@UAkron is a cooperative effort of the University Libraries and the University Press which showcases the research-based information that the university, its faculty, and its students generate.

The B-26 Marauder Archives of The University of Akron Archival Services consists of approximately 250 cubic feet of historic materials that document the important contribution made by the Martin B-26 Marauder and the men who operated and maintained them in World War II. Historical materials include photographs, letters, diaries, mission reports, and other materials. The archives also contain the official records of numerous Marauder reunion groups including newsletters, membership lists, reunion programs, and photographs. Published materials including bombardment group and squadron histories, personal accounts, and books and pamphlets are also included.

William McCollam (1831-1896) was a carpenter from Uhrichsville, Ohio who served for 100 days with the 161st Ohio Volunteer Infantry (OVI) of the 70th Battalion during the American Civil War and later became captain in the Ohio National Guard. His papers consist of 0.2 cubic feet of correspondence between McCollam and his wife Callie that document his military career and the life of other soldiers from Uhrichsville.

Lieutenant Colonel John J. Polsley served in the Shenandoah Valley during the American Civil War in the 8th Regiment Virginia Volunteers, which later became the 7th Regiment West Virginia Cavalry. Polsley was captured in 1863 and sent to Libby Prison in Richmond, Virginia. He was released six months later as part of a prisoner exchange and rejoined his unit where he served until the end of the war.  The papers consist of 0.5 cubic feet of primarily correspondence from Polsley to his wife Ellen (Nelly) S. Donnally Polsley. He wrote of camp life and battles as well as his thoughts on war. Also included are letters to his father, Judge Daniel H. Polsley.

Joseph Sailor (1824-1863), a tanner from DeGraff, Ohio, served as a private in the Union Army in Company E of the 45th Ohio Volunteer Infantry during the American Civil War.  His letters consist of 0.5 cubic feet of primarily correspondence to his wife and parents from 1862 until his death in 1863 from a wound received in a skirmish near Monticello, Kentucky.  The letters detail daily life of the Union soldier in camp, prosecution of the war in Kentucky, and medical practice during the Civil War.

Alvin Coe Voris (1827-1904) of Akron, Ohio served in the Ohio Legislature and then as commander of the 67th Ohio Volunteer Infantry during the American Civil War.  He rose to the rank of Brevet Major General commanding a Brigade and then a Division. The letters consist of 0.75 cubic feet of correspondence between Voris and his wife Lydia from 1860 through 1865 that relate the environment of the Ohio State legislature just prior to the outbreak of the Civil War as well as his experiences as a soldier and officer in the Union Army.

Sidney Edgerton (1818-1900) was an abolitionist and a Republican who served as a U.S. Congressional Representative for the Akron area from 1859 to 1863. He later was chief justice for Idaho (1863-1864) and the first territorial governor in Montana (1865-1866.)  He then returned to Akron at age forty-seven where he stayed, practicing law, for the remainder of his life.  These letters are especially useful to researchers for their coverage of the Civil War period in both Washington, DC and Akron.  Information about the United States’ westward expansion can also be found here.

The Daniel Guggenheim Airship Institute was operated by the Municipal University of Akron from 1929 - 1949. As part of the College of Engineering, the institute provided students with research opportunities relating to lighter-than-air flight, heavier-than-air flight, and meteorology. The records consist of correspondence, technical reports, and administrative files.

Edward C. Shoman was the marketing manager of big tire sales at the Goodyear Tire & Rubber Company in Akron, Ohio. Included in the papers are business correspondence, reports, and personal notes from his 34 years at Goodyear in addition to numerous Goodyear-related photographs, slides, video tapes, and published materials that mostly document Goodyear’s off-the-road tires.

Frank B. Baldwin was an employee of the Goodyear Tire & Rubber Company under their flight operations department and later their astronautics and undersea warfare sales department. He also served as a pilot and personal aide to Paul W. Litchfield, president and later CEO and Chairman of Board of Goodyear. Included in the papers are photograph albums, logs, and subject files from his 34 years at Goodyear in addition to numerous Goodyear-related film strips, slides, published materials, and artifacts.

The Goodyear Tire & Rubber Company Records contains approximately 1,000 cubic feet of correspondence, annual reports, financial reports, news releases, advertisements, audio-visual materials, photographs, scrapbooks, and publications that document the history of the company. The Photographic Negatives and Prints Series includes roughly 500,000 images that visually chronicle the rich and diverse history of the largest and most influential rubber company in the world.  Funding from the National Endowment for the Humanities (NEH) allowed Archival Services to digitize and make available online all 23,000 images from 1912-1951. Any views, findings, conclusions, or recommendations expressed in this website do not necessarily reflect those of the NEH.

The Louis Baus Canal Photograph Collection at The University of Akron Archival Services consists of 423 negatives of the Ohio & Erie Canal, Miami & Erie Canal, and connecting waterways from 1854 to 1933.  The majority of images were photographed by Louis Baus (1875-1949), a Cleveland, Ohio photographer, while others were acquired by Baus from his predecessors.  Included in the collection are images of canal boats, crews and passengers, and various locks, businesses, and homes along the canalways.  Digitization of the Baus Collection was sponsored in part through the generous support of the Ohio & Erie Canalway Association.

The Opie Evans Papers at The University of Akron Archival Services consist of approximately 40 cubic feet of archival materials documenting the life and work of African-American photographer, publisher, and businessman Opie Evans of Akron, Ohio. The papers include hundreds of photographic prints and negatives taken or collected by Evans during his career that provide a rich visual history of the African-American community in Akron and surrounding areas during the middle of the twentieth century. The images mostly depict African-American churches, workers, personalities, and social and fraternal organizations and events. They also capture the 1964 and 1967 elections and the civil rights movement in Akron.

The University of Akron Photographs visually document the history and development of The University of Akron, from its beginnings as Buchtel College in 1870 until its modern-day status as a state university. The photographs include photographic prints and negatives that depict individual students and faculty members as well as special events, student life, buildings, and the campus landscape. Images of academic departments and administrative units are also included.

Eileen Bluhm was the Vice President of Communications at the Akron Regional Development Board from 1975 to 1995 and was considered one of Akron’s “chief civic boosters.”  She was involved in a number of local organizations including the Ohio Ballet, Akron Zoo, and the Akron Art Museum, to name  a few.  She was also a supporter of education and women’s rights. The scrapbook contains photographs, articles, awards, and newspaper clippings that document her life and work in the Akron area.

Jorgen Petersen was a canal boat captain who hauled goods up and down the Ohio Canal in the 1860s-1870s.  During this time, he recorded his day-to-day activities in diaries highlighting his life on the Canal

John S. Knight (1894-1981) was a journalist and newspaper publisher from Akron, Ohio who inherited the Akron Beacon Journal from his father and parlayed it into a newspaper conglomerate known as Knight-Ridder Newspapers, Inc. His papers consist primarily of material relating to his life and career including correspondence, speeches, scrapbooks, “Editor's Notebooks,” newspaper clippings, photographs, phonotapes, and memorabilia.

Archival Services of University Libraries collects, preserves, and provides access to important historical resources that primarily document the history of The University of Akron and the region.  As part of our mission, Archival Services digitizes select historical resources for preservation and access purposes and makes them available online to promote the collections and make them more readily available to a broader audience.  Our digital collections have focused on our core collecting areas, which includes the history of The University of Akron, Akron and Summit County, the rubber and polymer industry, lighter-than-air flight, Ohio canals, the book and print culture, and the B-26 Marauder and 9th Air Force.

Please note that while some of our digital objects are in the public domain and therefore are not subject to copyright restriction, the majority of our digital images are protected by copyright law of the United States (Title 17, United States Code). The University of Akron makes these items available for personal use for private study, scholarship, or research. Any other use of the materials including publications, exhibitions, or productions is prohibited without written permission of The University of Akron Archival Services.  If you have questions about our digital collections or need to obtain copyright permission please contact Archival Services by phone at 330-972-6253 or by e-mail at archives@uakron.edu.

Please browse or search our online collections, which are listed and briefly described below.  We encourage you to check back periodically as new collections and materials constantly are being added.