A guide to help law students with research for International law

What is International Law?

According to the United Nations: 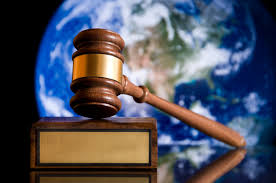 International law defines the legal responsibilities of States in their conduct with each other, and their treatment of individuals within State boundaries. Its domain encompasses a wide range of issues of international concern, such as human rights, disarmament, international crime, refugees, migration, problems of nationality, the treatment of prisoners, the use of force, and the conduct of war, among others. It also regulates the global commons, such as the environment and sustainable development, international waters, outer space, global communications and world trade.

"a. Treaties between States

b. Customary international law derived from the practice of States;

c. General principles of law recognized by civilised nations; and, as subsidiary means for the determination of rules of international law:

d. Judicial decisions and the writings of “the most highly qualified publicists”."

(from Sources of International Law by Professor Christopher Greenwood.)

If you are interested in Human Rights in particular, various pages in this guide have links specific to human rights.

Image by Tori Rector, via Flicker

Videos: What is International Law?